No, a fourth stimulus check has not been passed

Despite claims made in YouTube videos about a fourth stimulus check being passed, Congress has taken no such action. 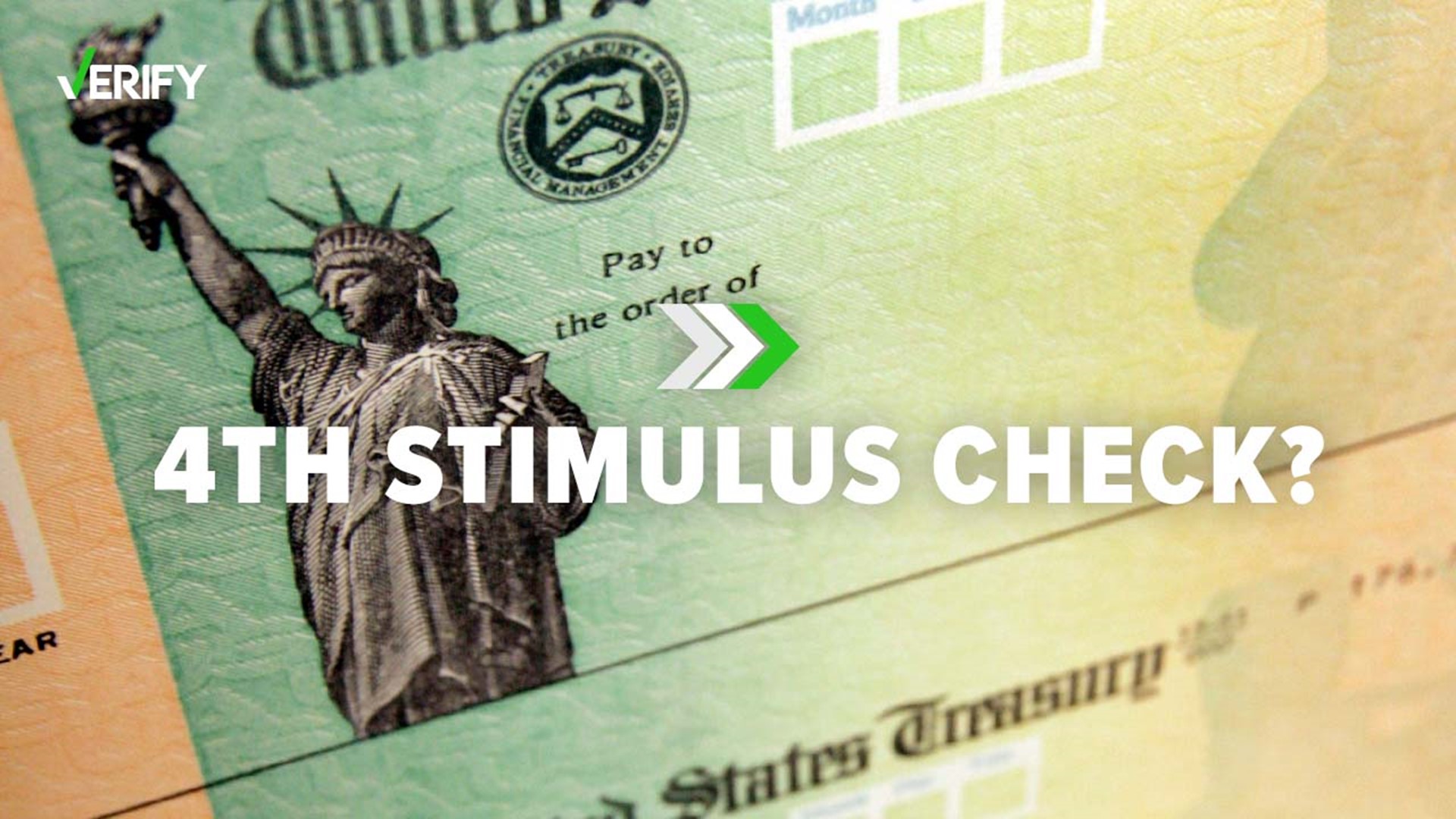 Since the beginning of the COVID-19 pandemic, Congress has passed three bills that included direct payments to millions of Americans – commonly known as stimulus checks. The three payments totaled more than $3,000 for eligible Americans. The most recent of those payments came in March 2021.

Viewer Sally texted the VERIFY team asking if a fourth stimulus check has been approved. She shared links to multiple YouTube videos that made the claim, including this one posted Nov. 1 from a channel with more than 400,000 subscribers that says “Big 4th Stimulus CHECKS PASSED.” Data from Google Trends also shows there has been an increase over the past week of people searching “4th stimulus check passed today.”

Has a fourth stimulus check been passed?

No, a fourth stimulus check has not been passed.

A spokesperson for the IRS told VERIFY that a fourth stimulus check has not been passed. The IRS and U.S. Department of Treasury have information on their websites about how people can receive the three previous stimulus payments, if they haven’t already, and makes no mention of a fourth payment.

A list of laws passed by the current Congress is posted online. A review of those laws shows there is no additional legislation that includes stimulus payments.

In March 2021, a group of Senate Democrats pushed for recurring stimulus payments to be included in President Joe Biden’s Build Back Better agenda. But recurring payments are not part of the Build Back Better plan framework the Biden administration released on Oct. 28.

When asked in June 2021 about the possibility of a fourth stimulus check, White House press secretary Jen Psaki downplayed the idea.

“[President Biden is] happy to hear from a range of ideas on what would be most effective and what’s most important to the economy moving forward,” Psaki said. “But he’s also proposed what he thinks is going to be the most effective for the short term, for putting people back to work, to getting through this pivotal period of time, and also to making us more competitive over the long term.”

Psaki was again asked in July 2021 about a fourth stimulus check. Her response focused on the supportive measures in the American Rescue Plan instead of on another round of payments.

More from VERIFY: Yes, inmates can claim their own stimulus checks