AirPods expose users to electromagnetic waves far below the FCC’s limit, which all wireless devices in the U.S. must follow. 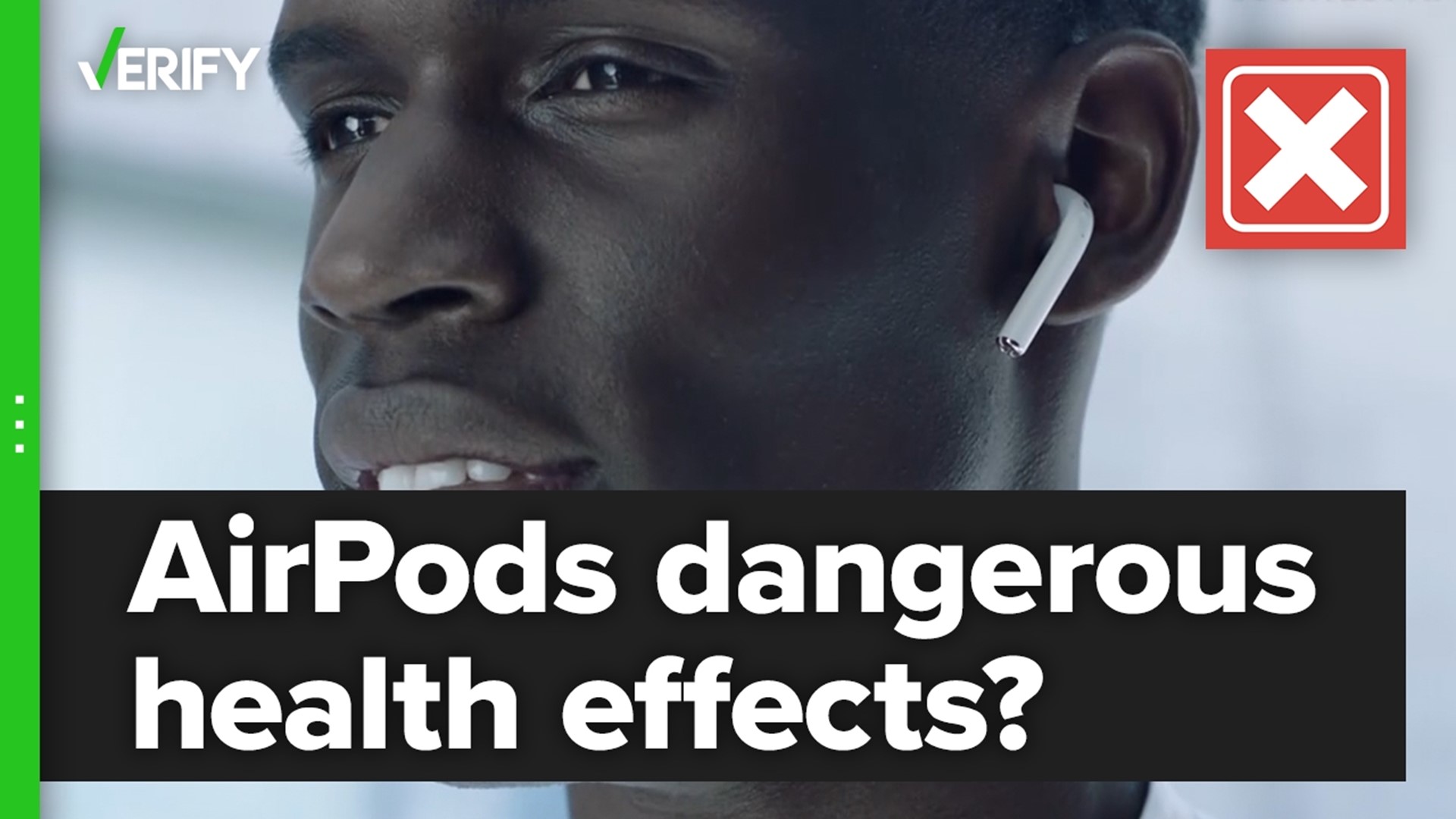 Apple released its third generation of AirPods, which are Bluetooth earbuds for Apple products, in late October.

Around the time of the release, a viewer asked VERIFY about viral posts stating AirPods produce higher amounts of electromagnetic energy than phones and are dangerous to human health. The viewer linked back to a tweet from mid-October that made the claim, but that tweet wasn’t the first time someone has made the accusation on social media. A video about the topic posted to Facebook in May has been shared more than 10,000 times since it was first published. The topic was even discussed on Apple’s forums back in 2019.

No. The maximum amount of energy AirPods can produce is still 10 times below the limit set by the Federal Communications Commission (FCC), which is itself far below the levels deemed safe by current research.

Wireless devices, such as cellphones and Bluetooth earbuds, emit a kind of electromagnetic radiation called radiofrequency (RF) energy. National and international agencies regulate the energy phones and other devices emit by measuring the rate at which the human body absorbs the energy. The agencies define this measurement as the amount of watts absorbed per kilogram of human tissue (W/kg).

The FCC limits wireless devices to exposing the average gram of human tissue to at most 1.6 W/kg of RF energy. The International Committee on Electromagnetic Safety (ICES), a standards coordinating committee of the Institute of Electrical and Electronics Engineers (IEEE), standardizes limiting exposure to 2 W/kg averaged over 10 grams of tissue. The International Commission on Non-Ionizing Radiation Protection (ICNIRP) sets guidelines limiting devices to 2.0 W/kg over 10 grams of tissue for the head and torso specifically.

The FCC explains these measurements are of the “most severe, worst-case (and highest power) operating conditions” for tested devices.

"Both cellphones and earphones utilize a technology called adaptive power control that can adjust the power emitted from the device (from some minimum to its maximum allowed power) based on the need to optimize audio quality and/or data communication on a moment-to-moment basis,” said Dr. Chung-Kwang Chou and Dr. Jerrold T. Bushberg, both experts on RF who are members of ICES and the National Council on Radiation Protection and Measurements.

“During actual usage, the exposures are typically hundreds of times below the maximum safe limit allowed,” Chou and Bushberg said.

That means Bluetooth earbuds like AirPods will emit different levels of RF based on the situation, and cellphones do the same thing. Still, those levels can never exceed the 1.6 W/kg absorption limit set by the FCC.

A California Department of Public Health study from 2019 suggests the low exposure from AirPods is consistent with other Bluetooth hearing devices. “Bluetooth headset power density exposures were 10-400 times lower than those of the cellphones to which they were connected and dependent on the headset rather than the connected phone,” the study’s authors said.

While international bodies like the World Health Organization (WHO) and IEEE state more research is needed to determine the likelihood of health problems at higher levels of RF exposure, ICES noted, “Despite about 70 years of RF research, low-level biological effects have not been established.”

The FCC states its standard for RF limits “is set at a level well below that at which laboratory testing indicates, and medical and biological experts generally agree, adverse health effects could occur.”

More from VERIFY: Yes, it is possible to get a hand injury from holding your cellphone too much