Yes, two medal contenders were disqualified from an Olympic race because their natural testosterone levels were too high

Two runners from Namibia, who have run some of the fastest times in 400-meter races this year, can’t compete in the event at the Tokyo Olympics. 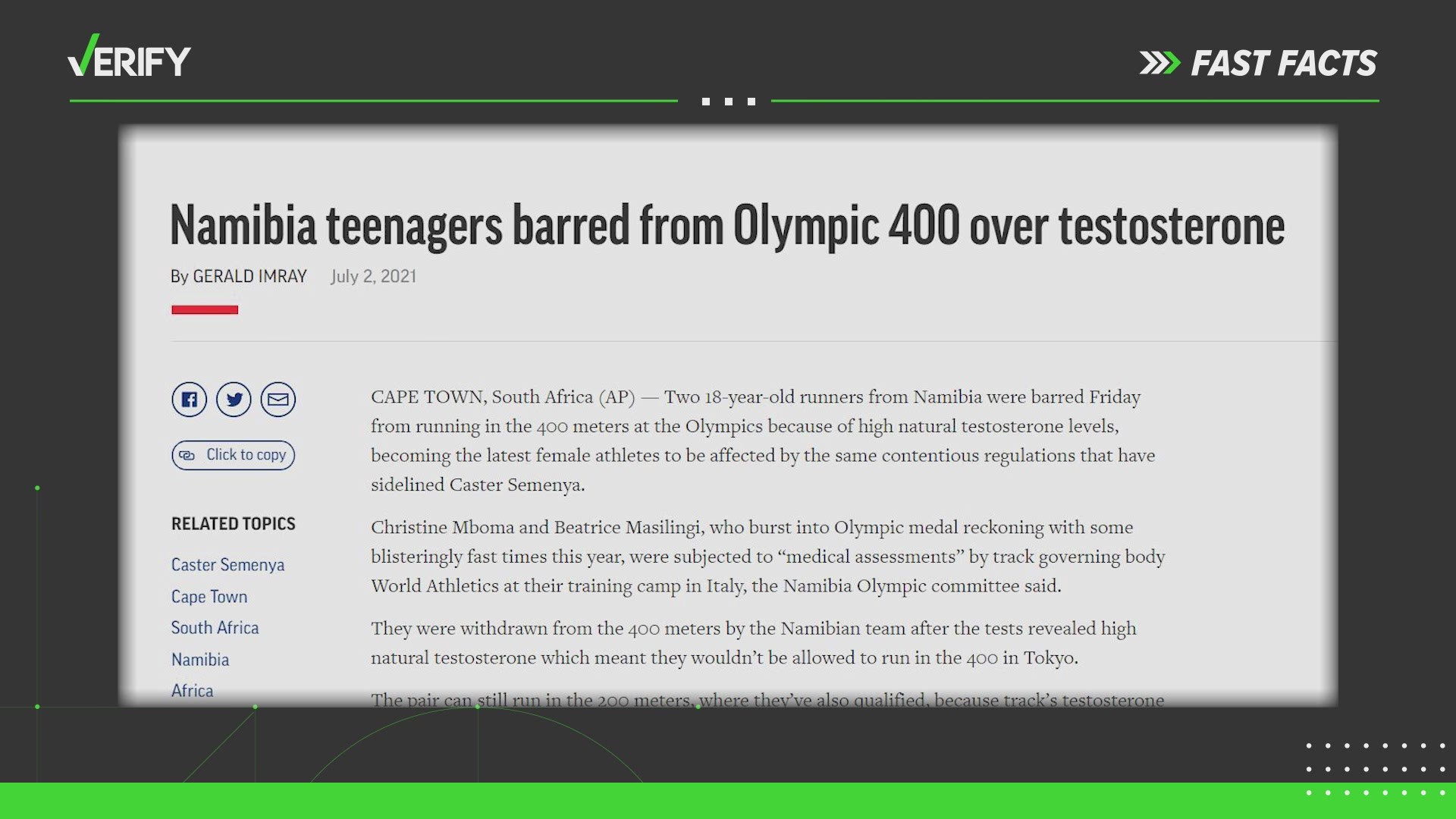 The suspensions of runners Sha’Carri Richardson, who tested positive for marijuana at the U.S. Olympic Trials, and Shelby Houlihan, who attributed her positive test for a steroid to a pork burrito, made headlines and were the subjects of conversation across the United States.

But it’s not just American athletes who are being banned. World-class athletes from across the globe have been ruled ineligible for events at the Tokyo Olympics for a variety of reasons. A person asked VERIFY on TikTok about a claim regarding female runners from Namibia who were expected to contend for medals in the 400-meter race.

Were two runners from Namibia disqualified from an Olympic race because their natural testosterone levels were too high?

Yes, two runners from Namibia were disqualified from the 400-meter race at the Tokyo Olympics because their natural testosterone levels were above the threshold set by regulators.

The Namibia National Olympic Committee (NNOC) posted about the disqualification of two runners, Christine Mboma and Beatrice Masilingi, on July 2. In the statement, the NNOC said Mboma and Masilingi were tested in Italy, where they were training, and it was discovered the two 18-year-olds have naturally high testosterone levels that make them ineligible to compete in certain international races, including the 400-meter.

The rule restricting natural testosterone levels for female runners was put into place by World Athletics, the international governing body for track and field competitions. It only applies to women competing in races between 400 meters and one mile.

World Athletics says the rule is not about cheating, because women with naturally high testosterone levels are not cheating. But the organization says the rule is about “leveling the playing field to ensure fair and meaningful competition.”

Since the rule went into effect in 2019, some of the best middle-distance runners in the world have been sidelined. The three women who medaled in the 800-meter race at the 2016 Rio De Janeiro Olympics, Caster Semenya, Francine Niyonsaba and Margaret Wambui, can no longer compete in the event because their natural testosterone levels are higher than the adjusted threshold.

Mboma had run the fastest 400-meter time in the world this year and Masilingi had run the third-fastest time, so both were expected to compete for medals in the event in Tokyo.

The NNOC said Mboma and Masilingi were previously unaware that they had naturally high testosterone levels.

World Athletics says athletes ruled ineligible for middle-distance races can compete in them again if they take medication that reduces their testosterone levels below the set threshold.

Semenya, who won gold in the 800-meter race at the 2012 London Games and 2016 Rio De Janeiro games, has filed lawsuits challenging the restrictions put in place by World Athletics but has been unsuccessful so far.

Although Mboma and Masilingi can’t compete in the 400-meter race, their Olympics dreams were not dashed. They also qualified for the 200-meter sprint. And because the testosterone rule does not apply to shorter races, they are allowed to compete.

More from VERIFY: No, Michael Phelps did not test positive for marijuana before competing in the Olympics