No, Veterans Day has not always been observed on Nov. 11

Congress passed the Uniform Monday Holiday Act in 1968, temporarily moving Veterans Day to the end of October. After pushback, the date was changed back to Nov. 11. 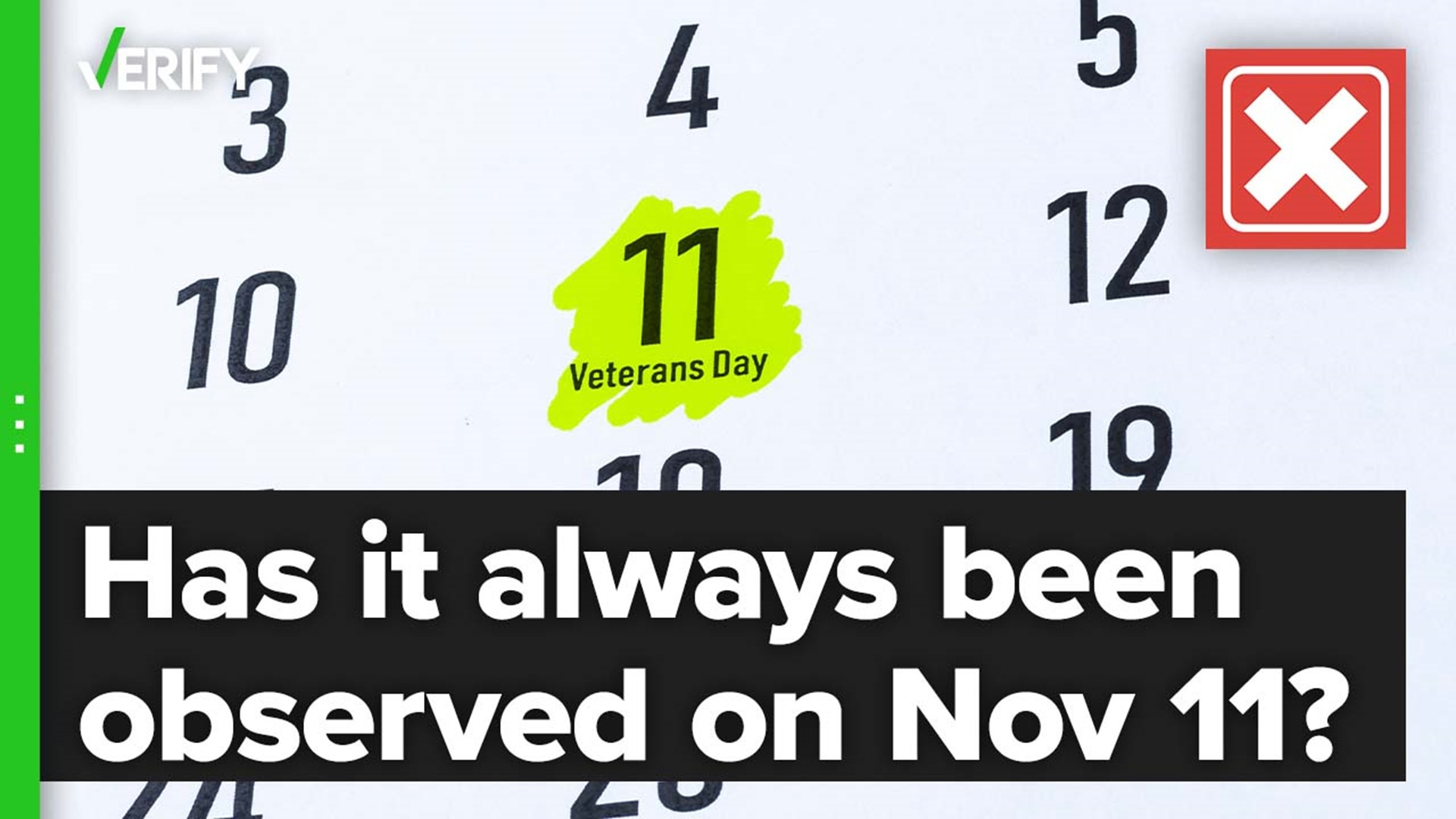 Each year on Veterans Day, the nation honors those who served in the United States military. But the U.S. Department of Defense says there are a few misconceptions about the holiday, like whom it honors and whether it has always been celebrated on Nov. 11.

Has Veterans Day always been observed on Nov. 11?

World War I officially ended when the Treaty of Versailles was signed at the Palace of Versailles in France on June 28, 1919. But, according to the U.S. Department of Veterans Affairs (VA), the fighting actually stopped seven months earlier when an armistice, which is a temporary cessation of hostilities, between the Allied nations and Germany went into effect on the “eleventh hour of the eleventh day of the eleventh month.” That’s why Nov. 11, 1918, is commonly referred to as the end of “the war to end all wars.”

In November 1919, President Woodrow Wilson officially proclaimed Nov. 11 as the first commemoration of Armistice Day, with the following words:

"To us in America, the reflections of Armistice Day will be filled with solemn pride in the heroism of those who died in the country’s service and with gratitude for the victory, both because of the thing from which it has freed us and because of the opportunity it has given America to show her sympathy with peace and justice in the councils of the nations."

On May 13, 1938, Congress passed legislation that officially made Armistice Day a legal holiday. The VA says Armistice Day was primarily a day set aside to honor veterans of World War I, but in 1954, after World War II and the Korean War, Congress amended the Act of 1938 by replacing the word “armistice” with "veterans" at the urging of several veterans service organizations. The change was approved on June 1, 1954, officially making Nov. 11 Veterans Day in the U.S.

According to the National Constitution Center, controversy arose in 1968 when Congress tried to move Veterans Day from Nov. 11 to the last Monday in October. On June 28, 1968, the Uniform Monday Holiday Act was signed into law. The VA says it was intended to give federal employees three-day weekends by celebrating four national holidays on Mondays: President George Washington's birthday, Memorial Day, Veterans Day and Columbus Day.

The first observance of the new date happened on Oct. 25, 1971, but the National Constitution Center says several veterans groups moved quickly to oppose the change. By 1974, many states, confused by the date switch, decided against commemorating the holiday in October.

Less than a year later, Congress amended the Uniform Monday Holiday Act and moved Veterans Day back to Nov. 11. On Sept. 20, 1975, President Gerald R. Ford signed the amended legislation into law, but it took three years to go into effect in 1978. The VA says this change back to Nov. 11 supported the desires of the overwhelming majority of state legislatures, all major veterans service organizations and the American people.

More from VERIFY: No, Veterans Day does not honor active-duty service members