Yes, warnings for Guillain-Barre syndrome are similar to flu vaccines but require context

There’s lots of questions and commentary surrounding the latest discovery. 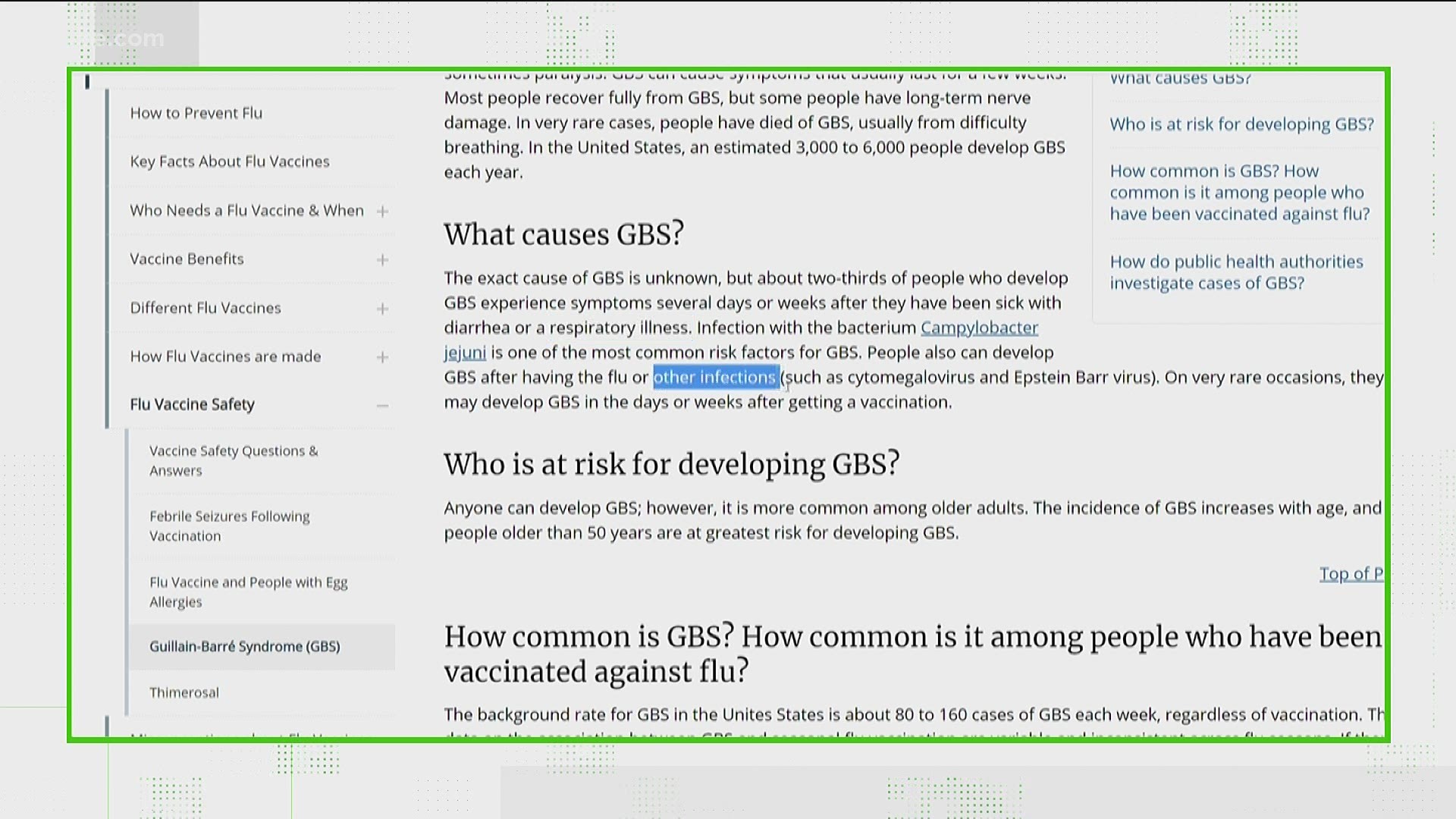 ATLANTA — The Food and Drug Administration announced a new warning about a possible link from Johnson & Johnson’s COVID-19 vaccine and a rare neurological reaction.

The new warning flagged Guillain-Barre syndrome, an immune system disorder that can cause muscle weakness and occasionally paralysis, after the CDC and FDA reviewed reports of about 100 people who developed the syndrome.

There’s lots of questions and commentary surrounding the latest discovery. So, we’re going to break some of them down here.

Centers for Disease Control and Prevention

Do viral infections of “many kinds” cause GBS?

Yes. Viral infections of many kinds can cause GB which there is no definitive understanding of cause

Straight from the CDC, “the exact cause of GBS is unknown.” However, reports show people who develop GBS usually experience systems after suffering from diarrhea, respiratory illnesses,  flu, Epstein Barr virus, and cytomegaglovirus.

On the CDC’s website dedicated to GBS, it reads in part, “on very rare occasions, they may develop GBS in the days or weeks after getting a vaccination.”

Is there a similar warning about GBS for flu vaccines?

It’s been on the warning label for influenza vaccines for decades.

In 1976, the risk of GBS increase after the swine flu vaccination. The National Academy of Medicine, conduced a scientific review in 2003 and found people who received the 1976 swine flu vaccine had an increased risk of developing GBS.

According to the CDC, the data on association between GBS and the flu vaccine varies, as the flu season changes every year.

“If there is an increased risk of GBS following flu vaccination it is small,” the CDC stated. “Studies suggest that it is more likely that a person will get GBS after getting the flu than after vaccination.”

Is the J&J vaccines the one with the most side effects?

At this point, the Johnson & Johnson seems to be the one vaccine that has caused the most side effects. No vaccine is except from side effects but I would encourage others to take the other vaccines if they have the option to do so.

The FDA fact sheet on the J&J vaccine lays out off the possible serious side effects. For J&J, this include GBS, blood clots with low levels of platelets and severe allergic reactions.

When looking at the fact sheet for the Pfzier and Moderna vaccines, they both detail possible severe side effects.

For Moderna, the possible serious side effects also include, myocarditis, pericarditis, and several allergic reaction.

So, all three vaccine have the same number of possible severe side effects. They’re just different between the one-shot J&J and the two-shot Pfizer/Moderna shots.

If you develop a serious side effect, can you sue the manufacturer?

For those who do experience serious side effects, there may not be a legal recourse for them, because of the “emergency use” granted to each manufacturer of the different vaccines.

Because of the emergency health crisis that was the pandemic, the FDA takes the crisis and takes into account the cost benefit analysis.

“The FDA basically had the authority to say that this emergency health crisis that we're dealing with, outweighs our typical safety protocols of having these testing procedures in place. And so, we're going to allow this drug which seems to be for the most part, OK, and beneficial and effective in fighting COVID. So, where a drug may have a harmful side effect to a tiny percentage of folks, that tiny percentage of folks are really going to be left without a recourse because the manufacturer has immunity under the terms of the emergency use authorization,” Hagen continued.”

Overall, the CDC and FDA said the cases of the GBS possibly linked to the J&J vaccine are rare and people should continue to get vaccinated to prevent hospitalization or death from COVID19.