The highly publicized spaceflights of Jeff Bezos and Richard Branson have led to many online claims. Here’s a look at what’s true and what’s false. 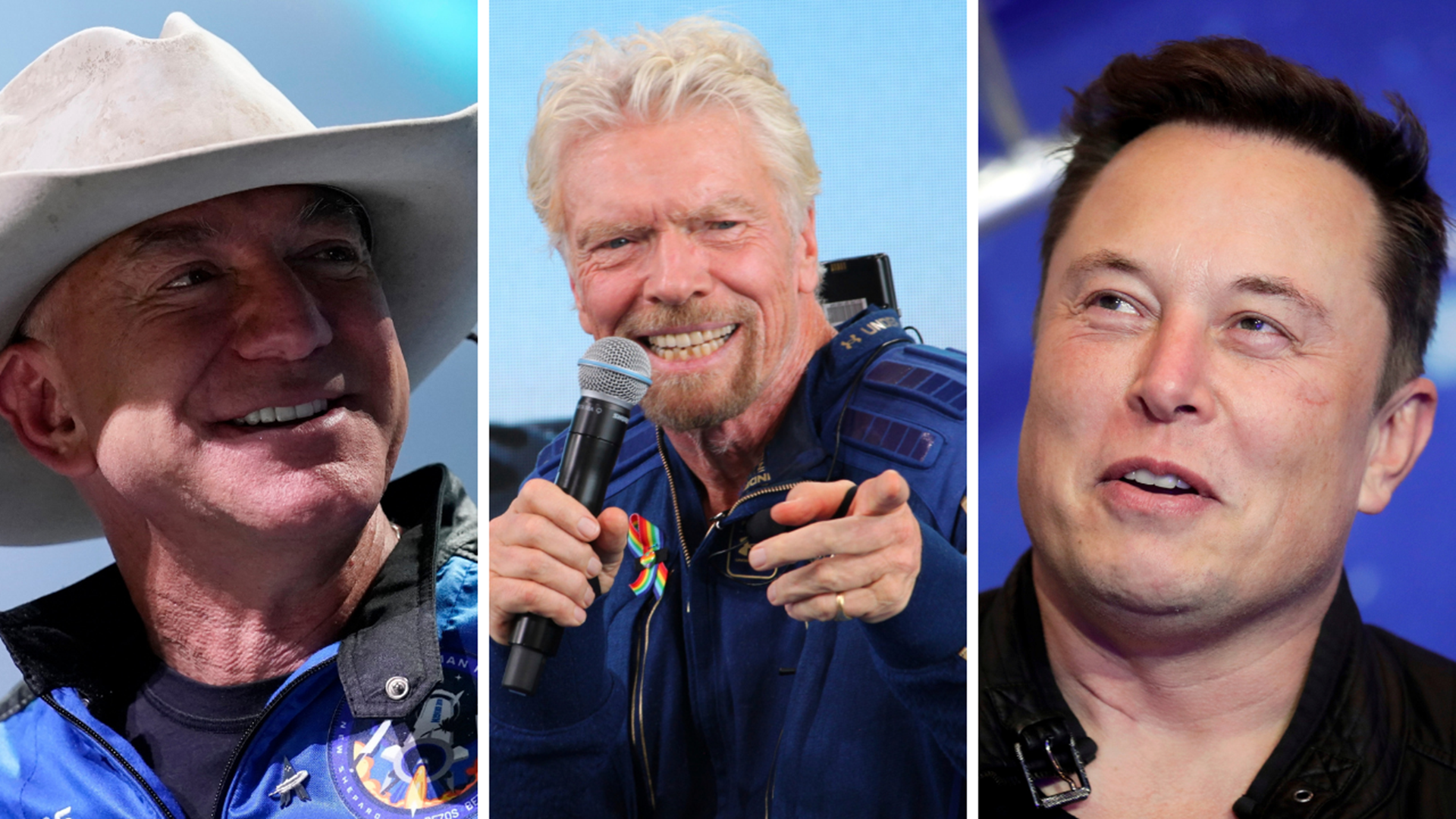 The so-called billionaire space race heated up this week as Amazon founder Jeff Bezos rocketed into space aboard one of his Blue Origin ships. His ride above Earth came nine days after Virgin Galactic founder Richard Branson flew into space aboard his own aircraft. Meanwhile, Elon Musk’s SpaceX regularly launches satellites into space to build its Starlink constellation with the goal of providing broadband internet across the world.

As part of this week’s “VERIFY Weekly” feature, the VERIFY team answered questions about where the new explorations into space stand. You can watch the full video on our YouTube page here.

Are Blue Origin, Virgin Galactic and SpaceX all doing the same thing?

No. While the companies share common interests, what they’ve done so far has been different.

While Bezos, Branson and Musk are often grouped together, their companies have had different accomplishments to this point and have varying stated goals.

Musk has said he wants SpaceX to lead the human colonization of Mars. It’s a goal he thinks can be accomplished by 2050.

But in the meantime, SpaceX has kept busy with other ventures. That includes the aforementioned Starlink project. SpaceX has also sent supplies and astronauts to the International Space Station. SpaceX’s partnership with NASA was taken to another level earlier this year when NASA tapped SpaceX to land the first astronauts on the moon since 1972. NASA hopes to send the first woman and next man to the moon in 2024.

While Blue Origin isn’t focused on Mars, Bezos’ company does have an interest in the moon. One of Blue Origin’s goals is to build a lunar lander that will “enable a sustained human presence on the Moon.” Bezos’ launch into space was the first human spaceflight by Blue Origin. The company also hopes to be a leader in space tourism and is now advertising for people to sign up for a trip to space.

Branson’s Virgin Galactic is also focused on space tourism and making it more accessible. On Virgin Galactic’s website, the company says it “will be running a regular schedule of spaceflights for private individuals and researchers” from its operational hub in New Mexico.

Is space a standard distance from the Earth’s surface?

No, there’s not one set measurement for how high space is. Instead, there are two different metrics that are used by different organizations.

On July 11, Branson became the first person to ride his own ship into space. But there is some debate over if he actually went to space. Branson and his crew traveled 53.5 miles above Earth, which is high enough to experience three to four minutes of weightlessness and see the Earth’s curve.

That’s the distance used by NASA, the Air Force and the Federal Aviation Administration to describe space. In the 1950s, NASA engineers “drew an arbitrary line” at 50 miles above Earth because the pressure at that height would cause traditional aerodynamic technology to fail. The military then used that height to differentiate between pilots and astronauts.

But in international communities, the standard is higher. After NASA decided on 50 miles, scientist Theodore von Kármán came to a different conclusion. He found that at 62 miles above sea level, traditional aircraft wouldn’t be able to produce enough lift to stay in the air because of the thinning atmosphere.

That distance from Earth – 62 miles – is now known as the Karman line. The Fédération Aéronautique Internationale, or World Air Sports Federation, which has the official say on aeronautic records, uses the Kármán line as its standard for space. And since it’s always a competition, that’s the distance Jeff Bezos flew to. 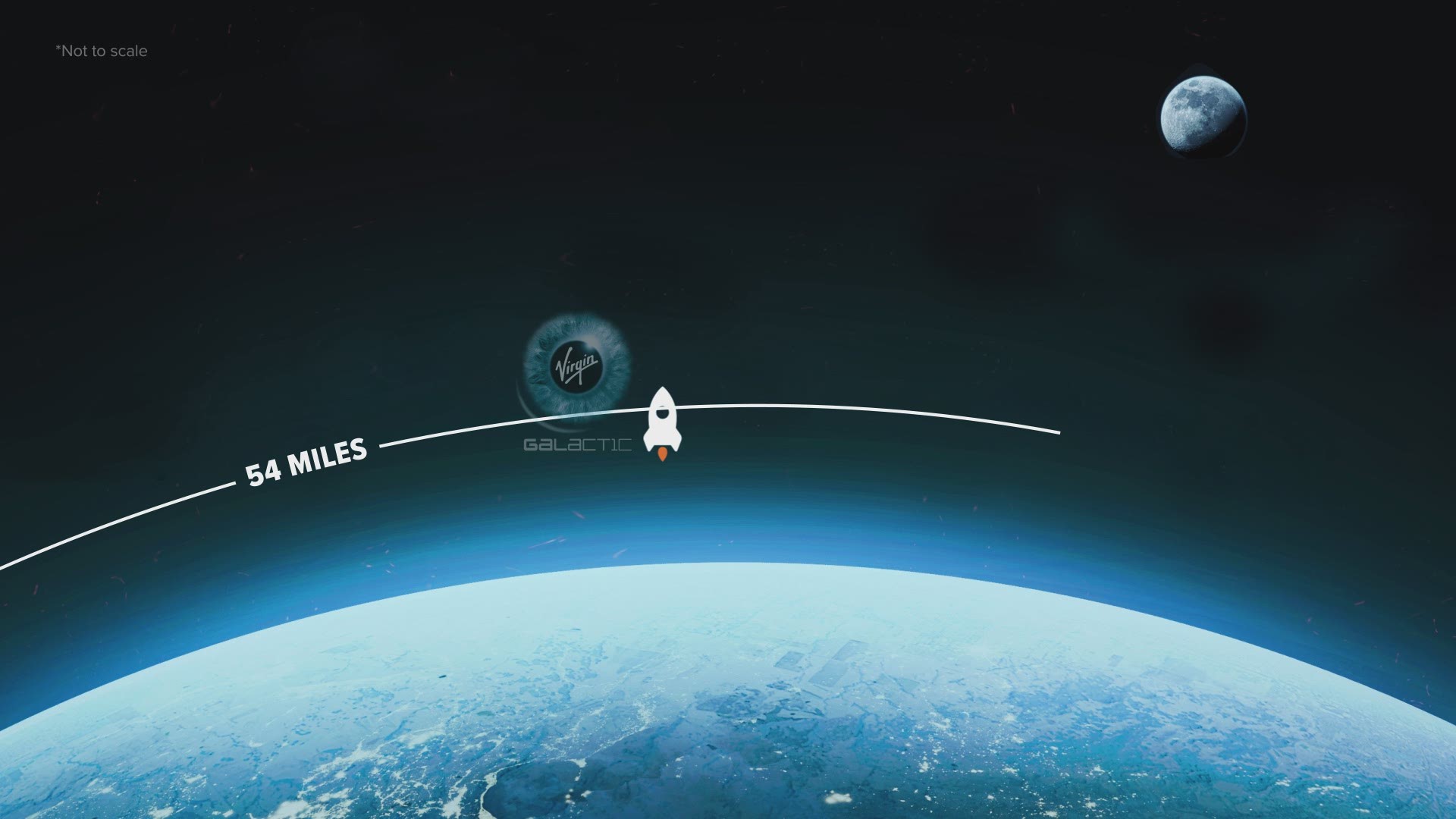 So, there are two different definitions of what constitutes space, but by NASA’s definition, both billionaires crossed the threshold into space.

Are these billionaires and their crews the first tourists to fly to space?

No, Branson, Bezos and their crews are not the first space tourists in world history, though they are the first in U.S. history.

The history of “civilians” in space dates back to the 1980s, according to our experts. That’s when NASA developed a program to train non-career astronauts and send them to space. But they weren’t tourists; each had a task on the mission.

That program was halted after the 1986 Space Shuttle Challenger explosion. Aboard the ship was high school teacher Christa McAuliffe, who was set to become the first teacher in space. The launch of the Challenger was watched on television with eager eyes across the country. About 73 seconds into the flight, NASA controllers lost transmission from the Challenger as the shuttle was engulfed in flames due to malfunctioning equipment. Everyone aboard the shuttle was killed.

Credit: AP Photo/Bruce Weaver
The Space Shuttle Challenger explodes shortly after lifting off from Kennedy Space Center, Fla., Tuesday, Jan. 28, 1986. All seven crew members died in the explosion, which was blamed on faulty o-rings in the shuttle's booster rockets. The Challenger's crew was honored with burials at Arlington National Cemetery.

Space tourism didn’t take off until 15 years later. In 2001, billionaire Dennis Tito paid a reported $20 million for a ride on a Russian spaceship to the International Space Station.

“It was for no other purpose than tourism,” space historian Dr. Roger Launius said.

Since then, roughly seven space tourists, according to our experts, have paid millions for seats on Russian space shuttles.

But it’s never happened in the U.S., making Richard Branson and his crew the first space tourists in American history.

Marco Caceres, a senior space analyst at the Teal Group, said the flights by Branson and Bezos are about normalizing spaceflight.

“It's going to jumpstart an industry that really hasn't been particularly robust since the dawn of the space age because it's been dominated by government. And government tends to be much more cautious,” Caceres said.

More from VERIFY: No, Jeff Bezos' Blue Origin launch was not funded by taxpayer dollars