No, the Build Back Better bill does not include a methane tax on livestock

The methane fee outlined in the Build Back Better bill only applies to petroleum and natural gas systems, not to the agricultural industry. 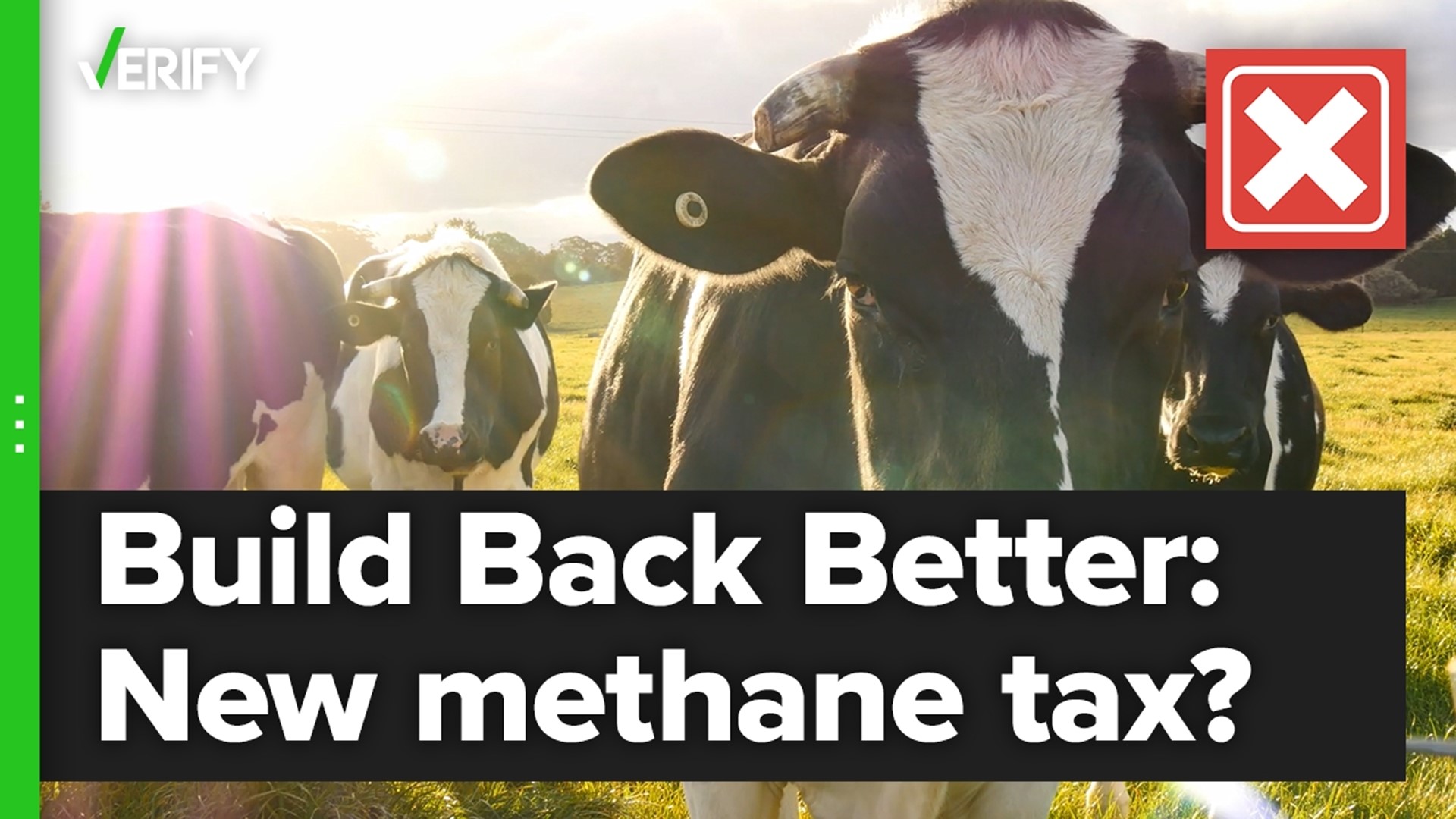 On Sept. 22, Congressman Markwayne Mullin, a Republican representing Oklahoma's 2nd Congressional District, penned an op-ed about President Joe Biden’s “Build Back Better” infrastructure bill. In the column, Mullin claims, “the legislation would impose a ‘fee’ on all methane emissions, including in our agricultural industry.”

“We all know that a fee is just a tax and that consumers are the ones who will pay for it. The tax is estimated to cost $6,500 per dairy cow, $2,600 per head of cattle, and $500 per swine each year. That is more than what the animals are worth, it’ll run ranchers out of business,” Mullin wrote.

On Nov. 4, Republican Florida Congresswoman Kat Cammack, who represents the state’s 3rd Congressional District, streamed live on Facebook and claimed the fee would equate to $4,500 per beef cow, $6,500 per dairy cow and $2,500 per hog. She said the cost would be passed down to consumers, making it impossible for a family of four to purchase ground beef.

On Facebook, the statistics from Cammack and Mullin have been shared hundreds of times and Cammack’s Facebook video had more than 2 million views.

The Build Back Better bill will ADD a $4,500 fee to every beef consumed in America. Can you imagine what that will do to...

VERIFY audience member A.L. asked if there was any truth to claim.

Does the “Build Back Better” bill include a methane tax on livestock?

No, the methane fee outlined in the Build Back Better bill only applies to petroleum and natural gas systems, not to the agricultural industry.

On Oct. 28, President Joe Biden announced the Build Back Better budget and infrastructure bill, which is a $1.75 trillion dollar project with funds for health care, child care and climate change.

“It’s a framework that will create millions of jobs, grow the economy, invest in our nation and our people, turn the climate crisis into an opportunity, and put us on a path not only to compete, but to win the economic competition for the 21st century against China and every other major country in the world,” Biden said.

In the 2,468-page bill, Section 30114 is the provision specifically addressing the methane fee, which would be imposed on petroleum and natural gas systems, but not on the agricultural industry. The goal is to reduce greenhouse gas emissions.

Sam Keiffer, vice president for public affairs for the American Farm Bureau Federation, issued a statement to clear up any confusion about where the misleading numbers about livestock may have originated.

The numbers Mullin quoted in his op-ed likely came from an analysis conducted by the Farm Bureau, at the request of a Congressional committee, to determine the potential impact on the agricultural industry, if there were to be a methane tax.

Keiffer confirmed these numbers were part of an analysis, and current legislation does not impose a methane tax on agriculture.

“While we oppose any tax on methane, Farm Bureau is grateful to lawmakers for recognizing the thin margins in agriculture and that such a tax would undoubtedly put family farms out of business. We are especially grateful to the Senate for passing an amendment that specifically exempts agriculture,” the statement from Keiffer said.

More from VERIFY: Yes, China is currently the biggest emitter of carbon dioxide