Floyd family attorney Ben Crump said the historic settlement "sends a message that the unjust taking of Black life will no longer be written off as trivial." 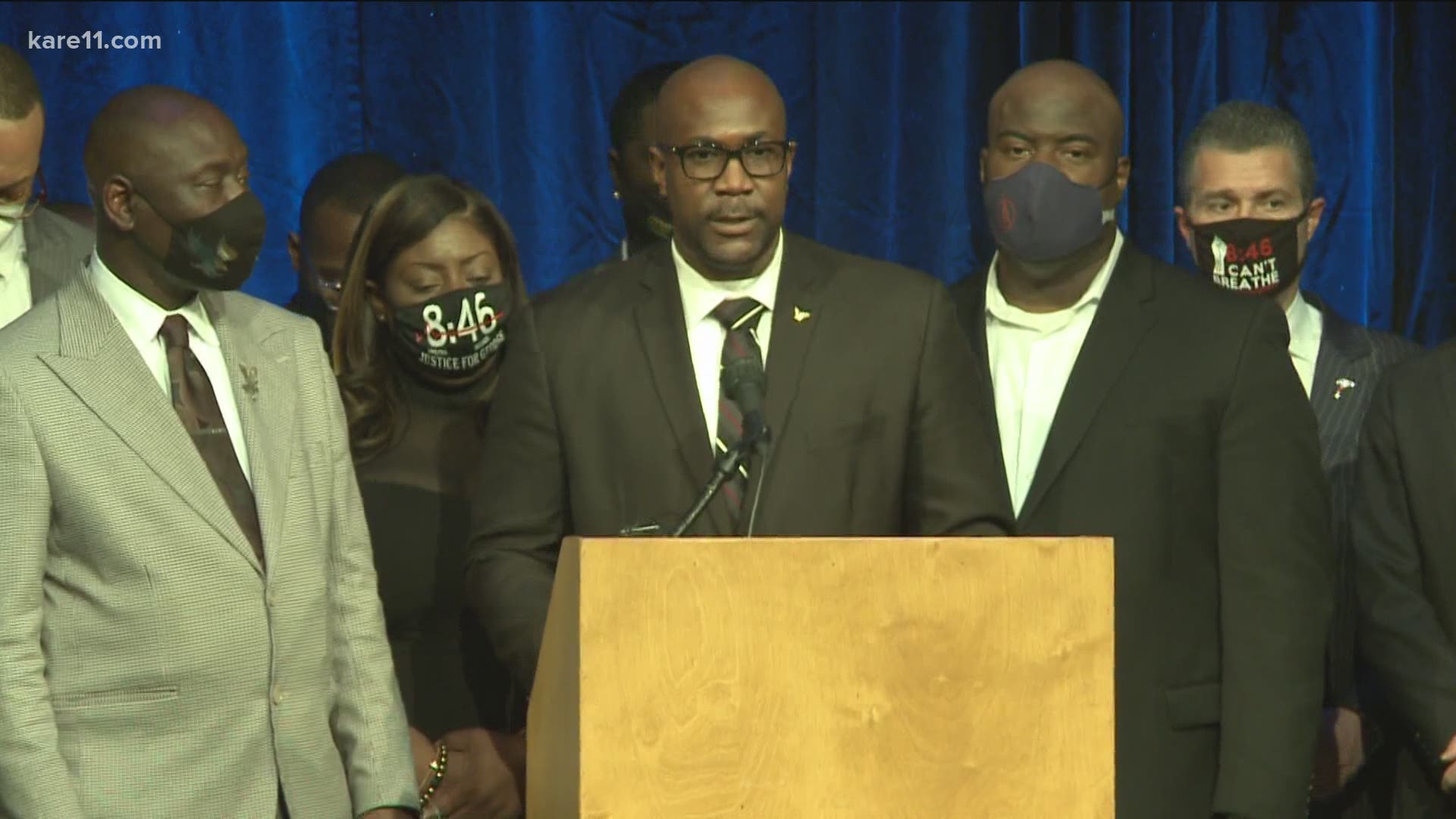 MINNEAPOLIS — The Minneapolis City Council has approved the largest police settlement in the city's history for the family of George Floyd and the community where he died.

The city will pay $27 million to the family of Floyd, who died under the knee of former Minneapolis police officer Derek Chauvin in May of 2020.

$500,000 of that will go to the community around the intersection where he died, at 38th and Chicago.

Floyd family attorney Ben Crump said this is the largest pretrial settlement in a civil rights wrongful death case in U.S. history. The largest police settlement in Minneapolis history was previously the $20 million paid to the family of Justine Ruszczyk Damond, shot and killed by former Minneapolis police officer Mohamed Noor in 2017.

"We are very grateful to stand here at this historic moment in the city of Minneapolis," Crump said at a news conference in Minneapolis Friday afternoon.

"When George Floyd was horrifically killed on May 25, 2020, it was a watershed moment for America," Crump said. "It was one of the most egregious and shocking documentations of an American citizen being tortured to death by a police officer ... one of the worst ever witnessed in history. And history will judge us for how we responded to this tragedy. History will judge us on our commitment to the principles of equality in response to this tragedy." 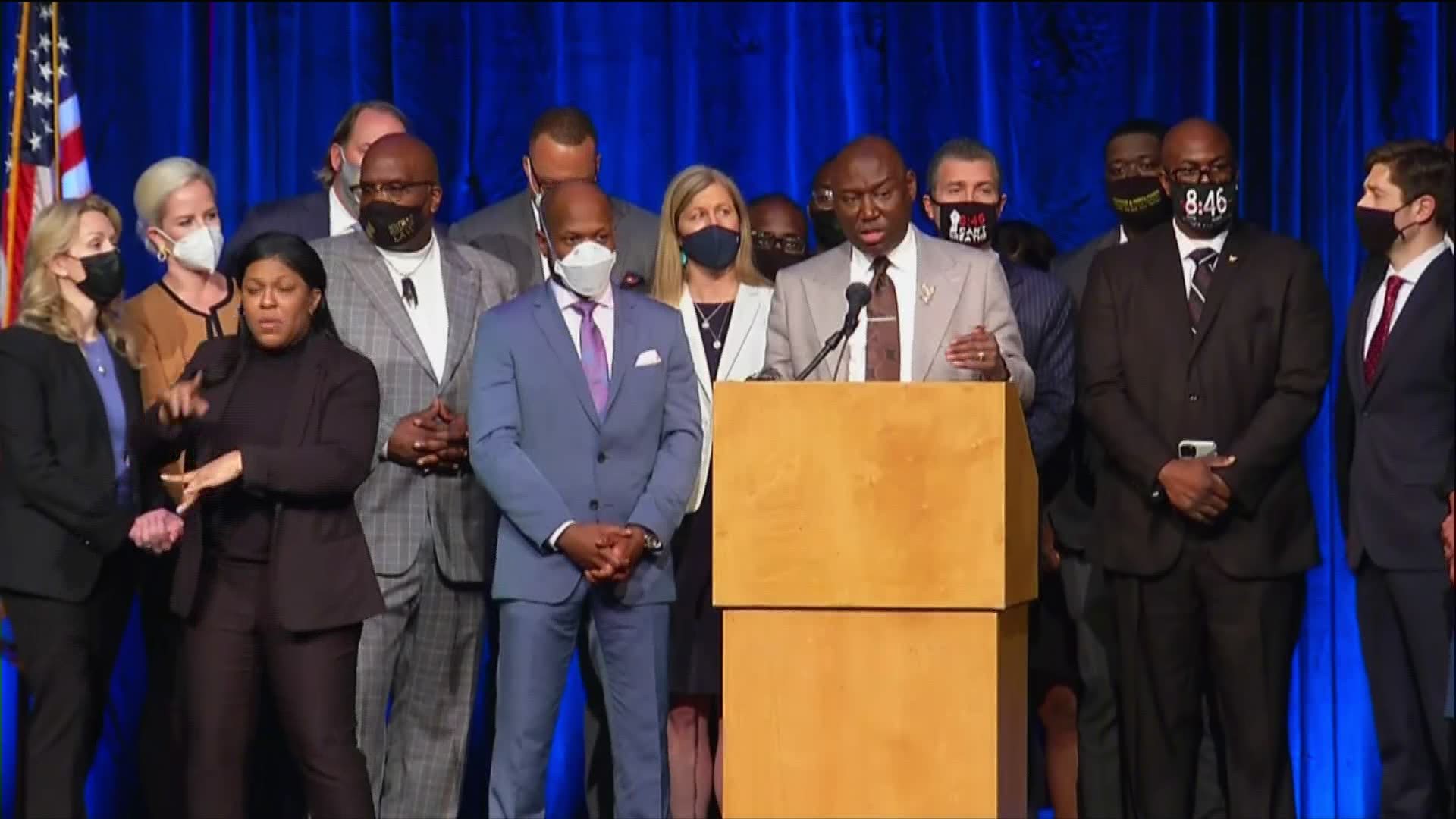 Crump said while the settlement will impact the Floyd family, it's the policy changes that stemmed from Floyd's death that will affect the rest of the world.

At the Friday news conference, one of the family's attorneys, Antonio Romanucci, called on corporations in Minneapolis and Minnesota to match the $500,000 the family is donating to the neighborhood around 38th and Chicago.

The developments in the civil case come at the end of the first week of criminal court proceedings in the trial of the former police officer charged in his death.

Former Minneapolis police officer Derek Chauvin is charged with second-degree and third-degree murder, and second-degree manslaughter in Floyd's May 2020 death. Jury selection began in his trial on Tuesday, with opening arguments expected to begin March 29.

Crump said Friday that the civil settlement offers another path to justice for the family, beyond just the criminal court system.

Floyd's family, represented by civil rights attorney Ben Crump, filed a civil lawsuit against the city of Minneapolis in July 2020. In the courtroom during the Chauvin trial on Tuesday, attorneys mentioned a "Rule 68 offer" to the Floyd family. Friday at noon the Minneapolis City Council went into closed session to discuss and ultimately approve the settlement.

Minneapolis city leaders said the settlement will be paid through the city's self-insurance fund and reserves.

"The city has prioritized making sure we have enough in reserves," said Minneapolis city coordinator Mark Ruff. "We have other reserves we have set aside for these kinds of liabilities. We can confidently say this settlement alone will not result in property taxes increasing."

George Floyd's brother, Philonise, spoke on Friday and said he was thankful for the settlement - but it doesn't replace his loss.

"Even though my brother is not here, he’s here with me in my heart," he said. "If I could get him back, I would give all of this back."

Philonise Floyd said his brother "made a movement."

"I know that he’s with us and he’s standing up right now knowing that we have the opportunity to be able to fund low-income African American communities," he said.

He thanked the protesters he said put their lives on the line by marching and showing their support even during a pandemic.

George Floyd's sister, Bridgett, issued a statement Friday that reads in part, "On behalf of all of my family members, I am pleased that this part of our tragic journey to justice for my brother George is resolved."

She was not able to be in Minneapolis for the news conference but she said her work with the George Floyd Memorial Foundation will be a priority going forward.

"The purpose of the Foundation is to honor my brother’s memory and legacy as a community-minded volunteer who would truly give the shirt off his back to someone who needed it," she wrote. "While our hearts are broken, we are comforted in knowing that even in death, George Floyd showed the world how to live." 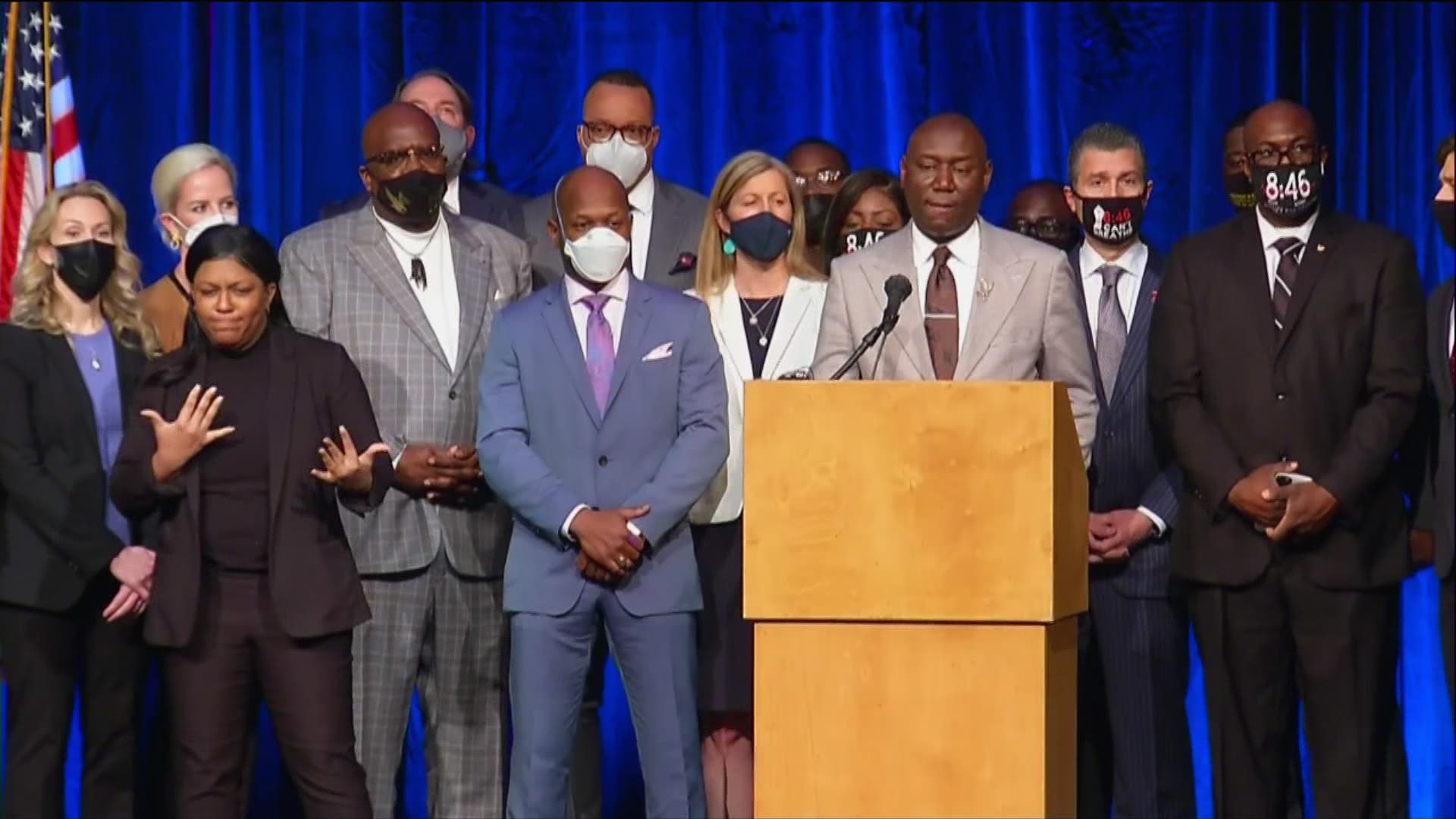 Crump said on Friday that it's not enough for America to say that George Floyd's life matters, or that Black lives matter.

"We have to show that George Floyd's life matters by our actions," he said.

Crump applauded the city of Minneapolis for "showing the world responsible leadership."

"Today they have shown that the life of George Floyd, and Black lives, matter to them," he said. "After the eyes of the world rested on Minneapolis in its darkest hour, now the city can be a beacon of hope, and light, and change for cities across America and across the globe."

Crump said that the historic magnitude of the settlement sends a message about the value of Black lives.

"It sends a message that the unjust taking of Black life will no longer be written off as trivial, unimportant or unworthy of consequences," he said.

"Our Black community has endured deep and compounding trauma over this past year, none perhaps more acutely than George Floyd's family standing with me right now," Frey said.

The mayor thanked the Floyd family for their "warm embrace of meaningful and overdue arbitration reform."

Minneapolis City Council Vice President Andrea Jenkins said George Floyd's death "has forever transformed the city of Minneapolis. A city that is reeling from pain and so much loss."

"George Floyd's life mattered and we are here today to honor his life and his legacy," she said.

Jenkins shared the story of a cousin who died in police custody, and said many other Black families know the same loss.

"It must stop. It has to stop," Jenkins said. "Now there will be 27 million reasons for it to stop."

Crump urged the public to show the same leadership by "remaining calm" and exercising peaceful protest in honor of Floyd.

RELATED: Church leaders gather for community prayer at 38th and Chicago ahead of Chauvin trial

One Floyd relative is allowed in the courtroom for the Chauvin trial every day, due to COVID-19 restrictions. On Monday, during pretrial motions, that family member was Bridgett Floyd. She told reporters afterward that it was difficult to be in the room with Derek Chauvin, but she wanted him to know "how much love Floyd had."

“I’m here to be his voice,” she said on Monday. “My family and I are glad the wait is finally over and the day is here. We are praying for justice. Our hope is that justice prevails and we can all use this as an opportunity to be better and do better for those around us.”

RELATED: What we know so far about the jurors in the Derek Chauvin trial