Seven of the 14 people needed to sit on the jury for the trial of the former Minneapolis officer, charged in the death of George Floyd, have been chosen. 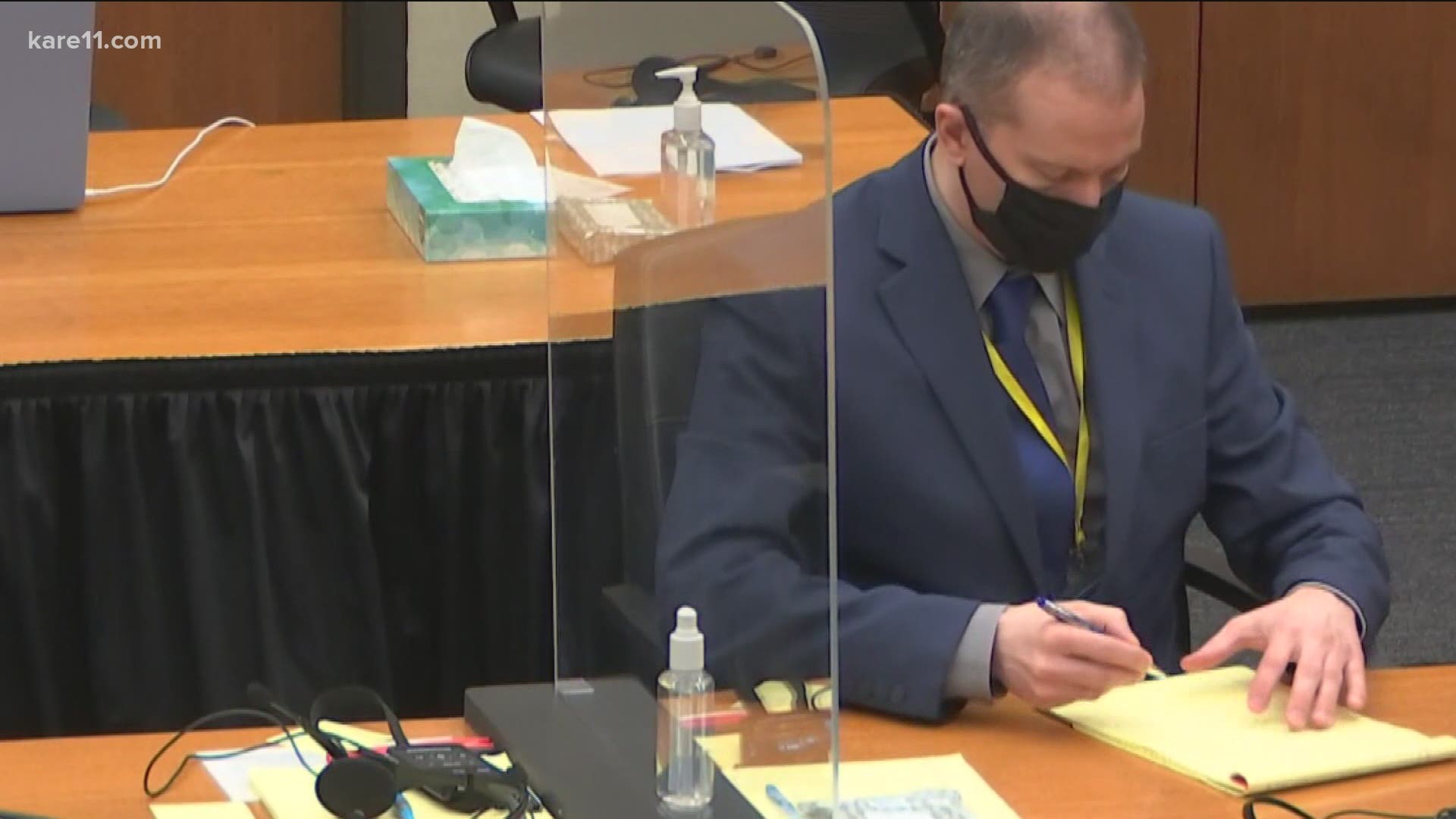 At the end of the first week of jury selection, half the jurors have been seated for the murder trial of Derek Chauvin in the death of George Floyd.

One woman was seated on the jury Friday afternoon, bringing the current count to seven. Seven more people need to be selected to bring the jury to 14 people - 12 jurors and two alternates.

Three of the seated jurors so far are white men, one is a multiracial woman, one is a white woman, one is a Black man and one is a Hispanic man. Judge Peter Cahill said Friday that he may start asking potential jurors to self-identify their race on the stand once they are chosen. Previously the courts have been releasing the self-identified race from the jury questionnaire each person has filled out.

While jury selection continued Thursday, the Minneapolis City Council approved a $27 million settlement with Floyd's family over his death, the most substantial in city history and one of the largest in U.S. history.

Jury selection will resume Monday morning. Judge Peter Cahill has said that opening arguments will not start until March 29, even if all the jurors are selected before that.

RELATED: What we know so far about the jurors in the Derek Chauvin trial

After selecting one juror from the four people questioned on Friday, court is in recess until Monday morning.

After juror #44 was seated Friday afternoon, the defense and prosecution questioned two more jurors. One was dismissed for cause after less than 15 minutes.

The next, juror #48, was a white man and a military veteran who served in Iraq. He told the defense that regarding discrimination, he had never witnessed anyone treated differently than he was. He also said having been in the military, he believes it's easy for bystanders to say how they would handle a situation, but "completely different when you're in it for real."

The man was passed for cause by the defense, meaning they did not try to strike him from the panel. The prosecution ended up using one of its peremptory strikes on the man, in order to remove him from consideration.

The prosecution started with nine peremptory strikes, which they can use to dismiss a potential juror without cause. They have five remaining. The defense has used eight, and has seven remaining.

Because the judge had already released the rest of the potential jurors for the day, court wrapped up early at 3:30 p.m. Jury selection will resume Monday morning.

The seventh juror has been seated in the Derek Chauvin trial.

Juror #44 was questioned by the defense and the prosecution for much of the day on Friday. She is a white woman in her 50s who works in the nonprofit sector, and said she has an "analytical" mind.

The defense spent time questioning her about her belief that systemic racism is an issue in the criminal justice system, and that people are treated differently due to the color of their skin. She also said she believes that people have "implicit bias" that impacts the way they view the world.

The prosecution asked her about her strong views on the harmful impact of drugs, and how that might affect the way she sees George Floyd.

The prosecution also questioned her about her statement that "I believe that humans are inherently good." They said she will be asked to determine intent, and potentially ill intent, in Chauvin's actions. She said she can set aside her opinions to do that.

She told both sides that she will be able to look at the case fairly and judge it based on the facts.

Both the prosecution and defense agreed to allow her onto the jury, bringing selection to the halfway mark. She is the second woman to be seated on the panel.

State: When you heard George Floyd had drugs in his system what did that make you think?
#44: Not sure if made me think anything. It could be relevant. Could not be relevant. I don't know.

After a longer than usual questioning period with juror #44, the defense decided to "pass for cause," which means they will not to use a strike to dismiss her. The prosecution will question her next, but first Judge Peter Cahill announced a recess for lunch.

The jury selection process will resume at 1:15 p.m. Judge Cahill said he hopes they can get through three more people, after they finish questioning juror #44.

Juror #44 said she believes there is systemic racism in the criminal justice system, based on her work in the nonprofit realm. However, she told the defense that she can look at the case in a fair and unbiased manner. She said she is an "analytical" person and will make a facts-based decision.

She says the only people who will know all the facts are the people in the courtroom. No one else will be able to judge based on bits and pieces.

The second person to be questioned Friday was a woman who asked to have the audio cut while she discussed a sensitive matter with the judge and the attorneys.

The judge has agreed to mute the live stream when a conversation with a potential juror is private or could identify them. The conversation is technically on the record but KARE 11 is not reporting details from those exchanges in order to protect juror anonymity.

Around 11:25 a.m. the judge turned the audio back on, and the defense began questioning juror #44.

This juror is talking in depth about her view of inherent systematic bias in the system against people of color.

The fourth day of jury selection resumed Friday at 10:30 a.m., after a morning break.

The first woman to be questioned Friday morning had already been called in on Thursday but time had run out before she took the stand. She was questioned first at 9 a.m.

Then at 10:30 a.m., the judge brought in the new group of jurors to be questioned Friday and gave them the general jury instructions.

Court is back in session. Judge giving instructions to a new batch of potential jurors. A reminder if you want to watch this live @kare11 is streaming this on our website and app.

Jury selection began for the fourth day on Friday morning at 9 a.m.

The first person to be questioned was juror #42, a woman who is a recent college grad and described herself as a "genuine person." She said she believes police reform is needed, and that she attended a protest after George Floyd's death. She told defense attorney Eric Nelson that she can set her opinions aside to listen to the case fairly.

She wrote in her questionnaire that she believes everything happens for a reason, so she believes if she is seated on the jury, it is for a reason. Nelson asked her if that reason is to make sure Chauvin gets convicted. She said no, "to have someone here who has an open mind."

Nelson used his eighth peremptory strike to remove the woman from consideration before the prosecution had a chance to question her.

The defense started with 15 strikes, so they have seven left. Those strikes can be used to strike a juror without a specific cause.

42 says she would resolve conflict between other jurors by listening to both sides, try to listen to what both people are saying and give her thoughts as well. Is willing to re-examine her thoughts.

The judge, defense and prosecution need to find eight more jurors to decide whether to convict Chauvin of the three charges he's now facing in George Floyd's death.

When jury selection began on Tuesday, March 9, Chauvin was already charged with second-degree murder and second-degree manslaughter. The defense previously asked the judge to drop the third-degree charge prior to the beginning of jury selection for lack of probable cause, and Cahill agreed. But the Minnesota Court of Appeals ruled that was an error, and asked the judge to reconsider the charge.

The defense then asked the Minnesota Supreme Court to review the third-degree murder charge, but on Wednesday they denied review, leaving it in the hands of Judge Cahill. Since the defense did not appeal Cahill's decision, jury selection continued moving forward.

Judge Cahill has said opening arguments will not start until March 29, regardless of how long it takes to seat the full jury.

GALLERY: The Trial of Derek Chauvin

1 / 48
David Peterlinz/KARE 11
Protests outside the Hennepin County Government Center on April 19, 2021, the day of closing arguments in the Derek Chauvin trial.