Return of the cicadas | How Brood X will impact your yard, ears and life this spring

They're back, baby. Seventeen years in the making, Brood X cicadas will start their emergence across East Tennessee this month 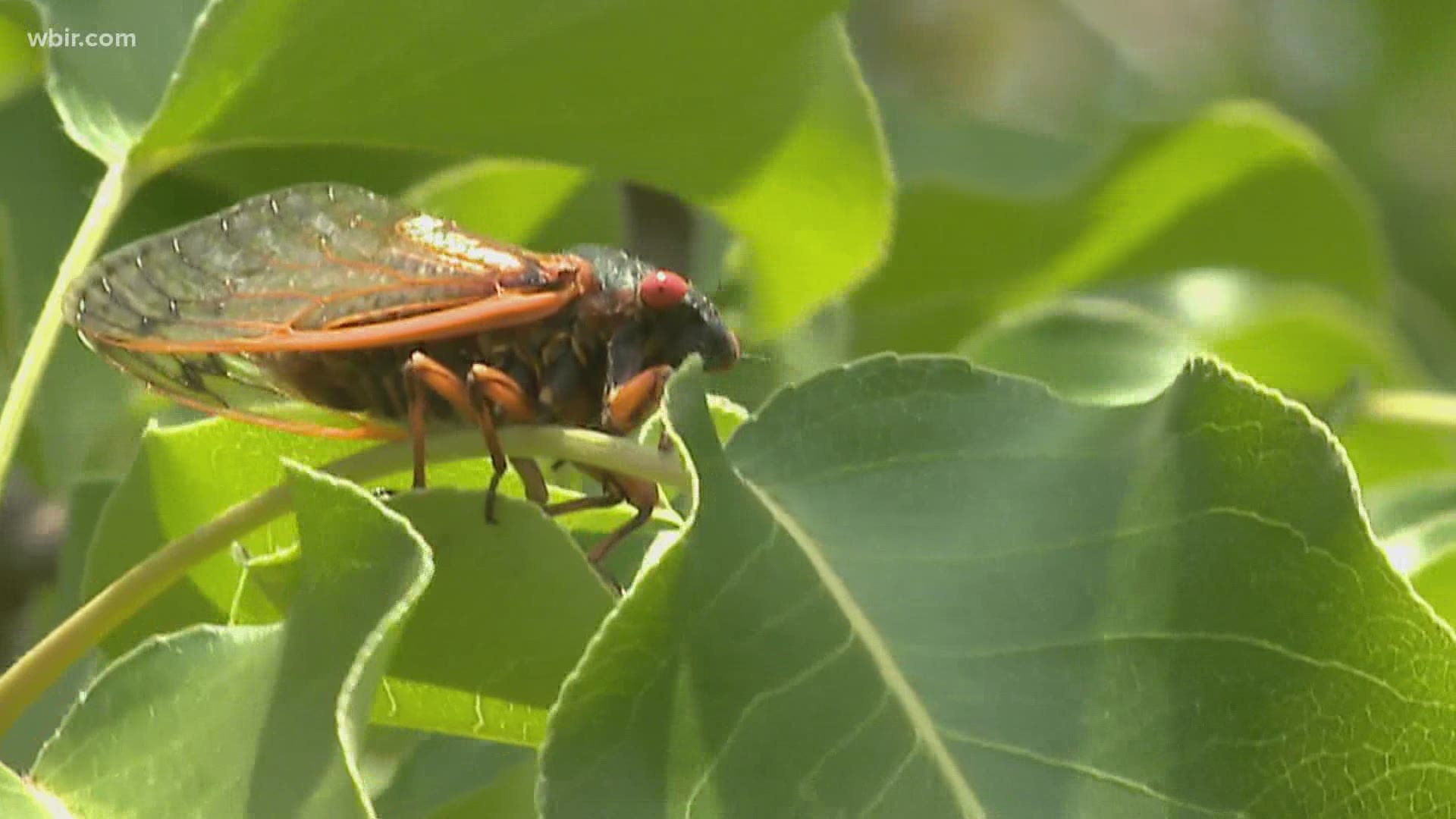 But the time has come.

The cicadas are making a comeback.

Yes, we get cicadas every year. You know their sound. Always humming, singing in the dusk. So loud you forget what a quiet evening sounds like.

If you think that's annoying, prepare for things to get kicked up a notch, because Brood X is back, baby.

Differences between annual and periodical cicadas

Brood X and regular annual cicadas differ in a few ways in both size and color, according to Dr. Jim Fredericks, chief entomologist for the National Pest Management Association.

Your average summertime cicada is green and black and white, a bit bigger than your thumb. 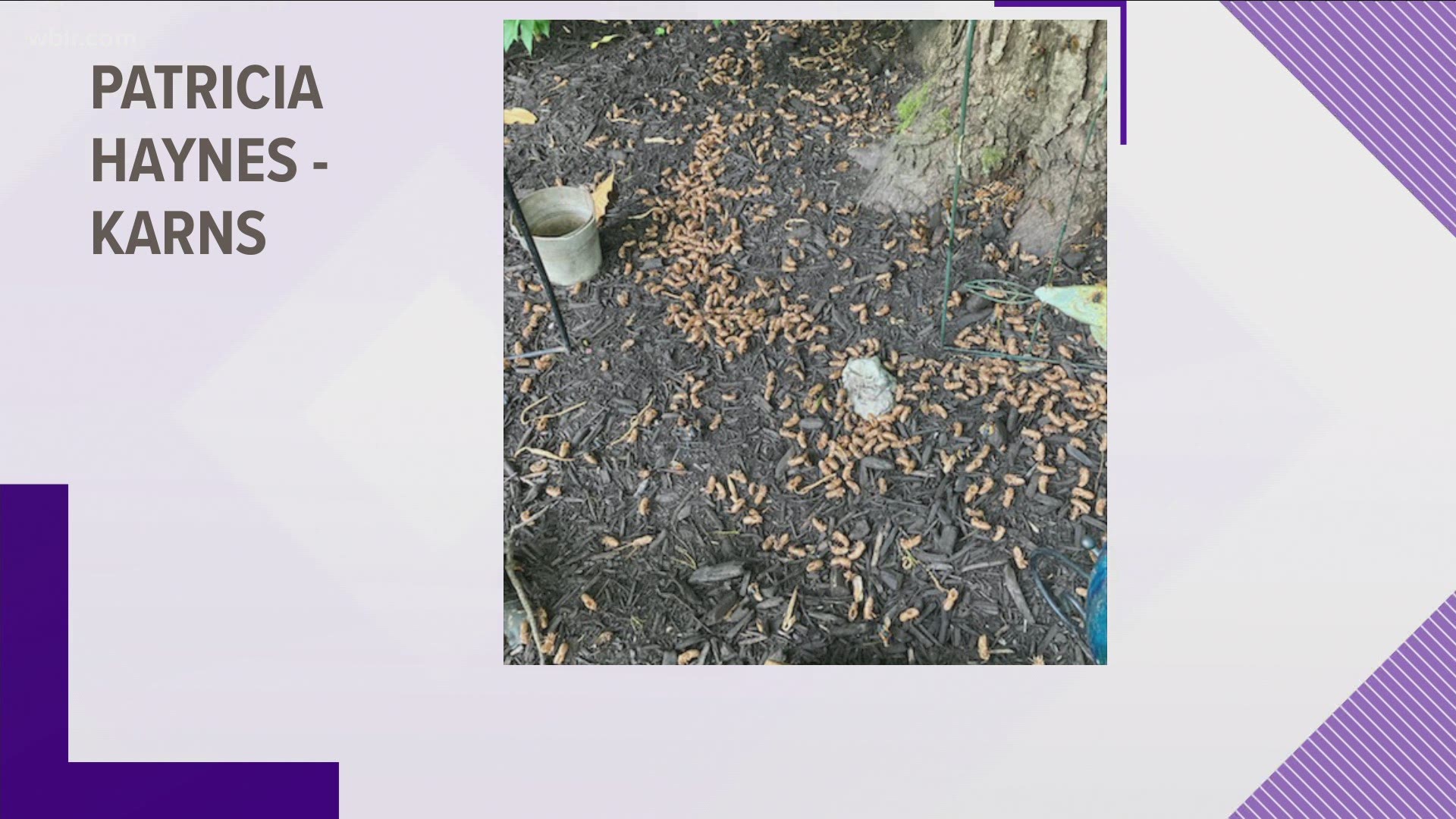 Brood X is slightly smaller, about the size of peanut with the shell still on.

Both types of cicadas are winged, plus they can't and won't sting or bite you.

The most noticeable difference will be the noise.

"Individually, they're comparable. But in the case of these periodical cicadas, there is a much. much greater density of singing males at any one time," said Fredericks.

Brood X hoards often reach 100 decibels of sound when they all sing at once, which is about the noise level of a power lawn mower.

A power lawn mower that doesn't stop running for weeks.

"Rather than kind of hearing those cicadas in the distance, and you know, it's the sign of the end of the summer, it will be an in-your-face kind of sound in places where there's a larger emergence," said Fredericks.

How many cicadas are we talking about here?

Billions, at least. It's estimated around 1 million cicadas on average emerge per acre, according to the University of Maryland.

To put that into perspective, that's about 25 cicadas per square foot. You could fit 4,500 into a single parking space, or roughly 1.2 million across the field at Neyland Stadium.

When the bulk of the brood emerges, you will know. They will begin to thoroughly cover trees, and their signature screeching will be unavoidable for roughly three to four weeks during the peak of the brood.

Cicadas are also not known to be particularly shy of humans, so if you are scared of big, screeching bugs flying at you... heading outdoors during this time will likely be a nightmare if you live near wooded areas.

How will this impact my yard?

Cicadas are not considered pests like ants or termites, as they do very little damage in the short amount of time they live above ground.

You may see some shells litter your yard as they shed their underground casings, and they’ll be loud hanging out at the tops of your trees.

But these cicadas are overall good for your garden.

"As they tunnel through the soil and and underneath feeding on tree roots, they're not harming the trees, but in fact are aerating that soil and providing a benefit there," said Fredericks.

The only damage you may run into is if you have new, young trees.

"When the female cicada lays her eggs, she actually cuts the end of the twigs on the branches, and it serves her eggs into those," said Fredericks. "So it can sometimes cause damage, but really only the youngest or most fragile trees see any risk."

Because of this, calling a pest control company won't help you get rid of cicadas.

Only time and natural predators can do that.

"There's not a whole lot that a pest control company can do for cicadas," said Fredericks. "They're flying insects. They have a specific lifecycle that's designed to overcome predators."

How to know if they'll emerge near you?

Okay, we get it, the cicadas are coming.

But, where exactly can we find them?

If those trees are the same, you can expect the cicadas to be feeding off the root system with plans to come right back up this time around.

Brood X can emerge in both urban and rural settings, but the presence of trees is key.

"So. 17 years ago, there were many parts of the country that had trees, but now they're a strip mall or a parking lot or something like that, or a housing development," said Fredericks. "And in those cases, there may be more limited emergences.

But that doesn't deter them completely.

Data from the last Brood X emergence in 2004 showed the cicadas in every county in our area except for Claiborne, according to research from the University of Tennessee Institute of Agriculture.

Credit: WBIR
Map showing the counties in East Tennessee in yellow where 17-year cicada Brood X will emerge in 2021.

UT scientists predict them to show up in some capacity in all those counties again this spring.

So get ready everyone.

The cicadas are coming.

If you are asking this question, you are braver than most.

Yes, you can definitely eat them. A few adventurous people even look forward to large emergences because these bugs are a delicacy. They're low in fat and carbs, offer a lot of protein and they're gluten free.

Some liken the taste of cooked cicadas to shrimp, which isn't totally unexpected because they are land-dwelling relatives to them and other arthropods. This also means people with shellfish allergies have a necessary excuse to pass on these.