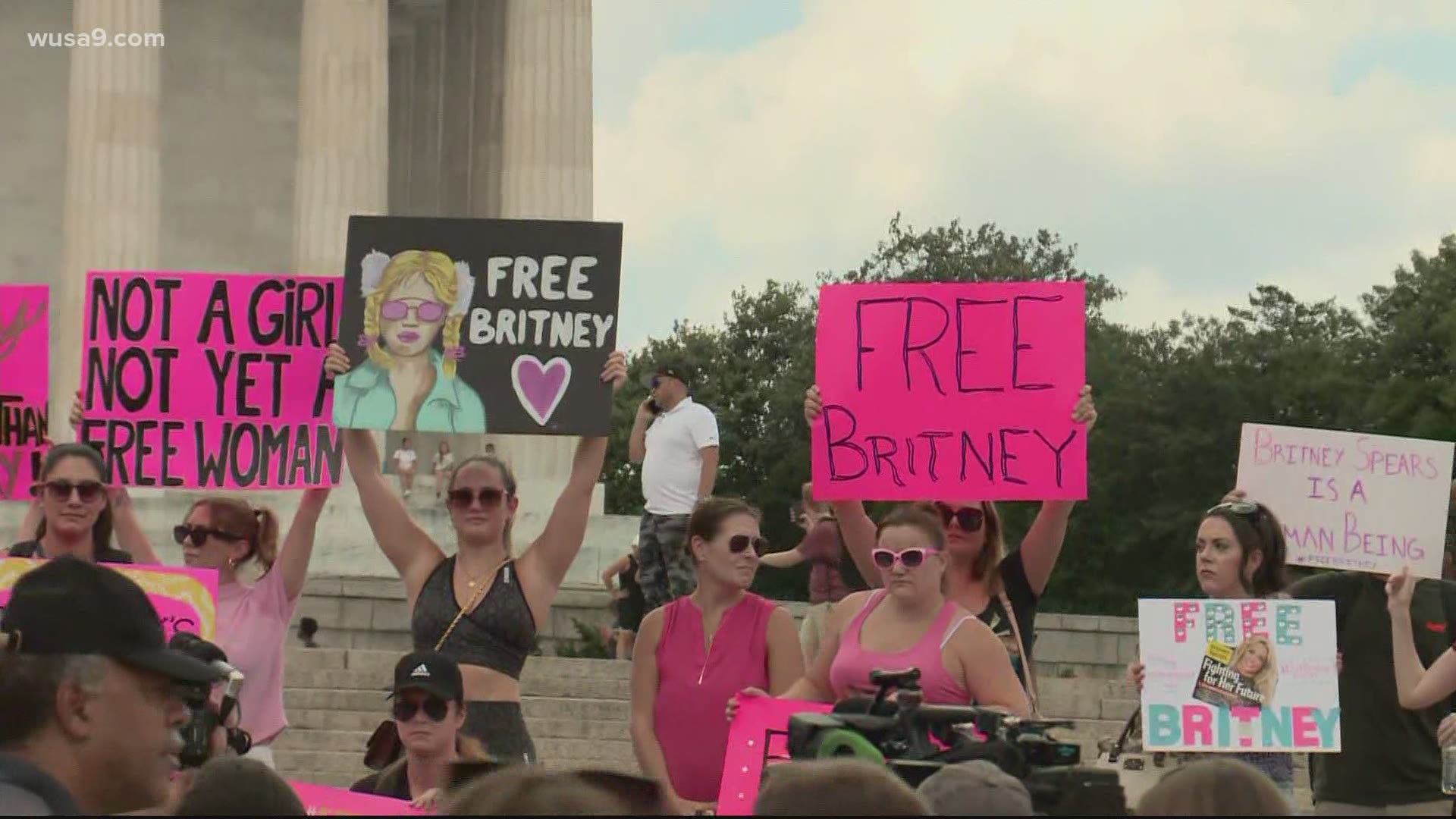 WASHINGTON — As high drama returns to a Los Angeles courtroom in the case of Britney Spears’ contentious conservatorship, supporters of the pop superstar assembled at the Lincoln Memorial Wednesday, calling for federal action to reform conservatorship law.

The D.C.-based group, Free Britney America, asked supporters to rally at the memorial, demanding lawmakers fundamentally reshape the scope and limitations of the guardianships.

“The issues raised by Ms. Spears, and countless other victims of conservatorship abuse is a gross violation of human, reproductive, and civil rights,” the group wrote on its website.

“Ms. Spears' case may be a very public one, but it is just one of the thousands where individuals are being overly medicated, forced into labor, and their estate stolen. All this, under the court’s eye and approval,” organizers added.

Credit: Jordan Strauss/Invision/AP
FILE - Britney Spears arrives at the Los Angeles premiere of "Once Upon a Time in Hollywood" on July 22, 2019. When Spears speaks to a judge at her own request on Wednesday, June. 23, 2021, she'll do it 13 years into a court-enforced conservatorship that has exercised vast control of her life and money by her father. Spears has said the conservatorship saved her from collapse and exploitation. But she has sought more control over how it operates, and says she wants her father out. (Photo by Jordan Strauss/Invision/AP, File)

During testimony last month, the 39-year-old implored a Los Angeles Superior Court judge to grant her greater control over her own life. For the first time, the music icon publicly revealed the full extent of her demands to end her father’s control over her financial and family decisions.

"We as citizens owe Britney and every other person who's trapped in one of these situations to do something about it," said Patrick Thomas, co-founder of Free Britney America. "We need national attention on this issue. It's not just something that affects people in Hollywood."

Spears told the court her father and attorneys controlling her conservatorship refused to allow her to remove her IUD, preventing her from having another child.

The singer added she was compelled by the arrangement to perform and continue taking medication against her will.

"It's a human rights issue," added Cassandra Dumas, co-founder of Free Britney America. "Her civil rights, and many others who are within conservatorships, their civil rights are being violated."

“I’m not here to be anyone’s slave,” Spears offered during the latest hearing. “I’ve lied and told the whole world I’m OK and I'm happy. It's a lie. I thought that maybe if I said it enough, I would maybe become happy because I've been in denial. I’ve been in shock. I am traumatized.”

>> It's Happening - Free Britney rally is coming to the Lincoln Memorial on Wednesday, 2PM....
The same day her case returns to LA Superior Court.
Organizers are demanding Congress get involved to reform conservatorship law.#FreeBritney @JeffAckermann https://t.co/kJGsVXt08T